Enable the link below to go to a tranc-ey video montage created by the inimitable dAS Ubuibi, with a soundtrack consisting of a track I contributed to the 2011 KFJC fund raising CD.

http://vimeo.com/44643856
From "Q" magazine (UK), June 2012, "Sounds of the Underground: Electronica and Dubstep" column
" "Chill out" became a dirty word sometime around 2001, amid a glut of CDs racked up in supermarkets full of Morcheeba, Moby and "oh you know, that track off that advert." But outside the realm of swooshy trip hop and naff pictures of beaches, there is much more for headphone voyagers who want to step outside the everyday…Further out still is Eric Glick Rieman, whose In My Mind Her Image Was Reversed (* * *, ACCRETIONS) is a set of sounds made with a mechanically altered Fender Rhodes piano. Not for everyone - but its meticulously balanced abstractions weave subtle magic given a chance. "
- Joe Muggs, Q

Exhibition at the Santa Fe Complex
6/1/12: Three of my graphic score series "Helix Aspersa" are included in an exhibition to celebrate the one year anniversary of Santa Fe's Center for Integrative Research and Exhibition. This is a one night event happening at the Santa Fe Complex, 1807 2nd St. #107, Santa Fe, New Mexico. Both the scores and several recorded audio realizations of the scores will be exhibited. These were recorded by my Snail Trio - Shayna Dulberger (acoustic bass), Chris Welcome (electric guitar) and myself (prepared Rhodes electric piano). http://www.facebook.com/events/457459947600902/469173873096176/?notif_t=plan_mall_activity 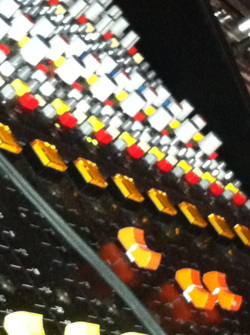 Snail Orchestra Recording
I'm was in the studio with the "Snail Orchestra" on 4/20/12 (an 8 piece ensemble I gathered to play at the Berkeley Arts Festival in January 2012). We recorded a series of new structured improvisations with a snail theme (the theme is not actually composed by snails, although some of the graphic scores used in these pieces were partially made by snails...). At present this is titled the "Snail Cantos".

I'm deeply into the process of mixing and editing these with Myles Boisen of Guerilla Recording in Oakland, CA, and will likely finish the first week of June.
Here is a link to my 3/24/12 performance on KUSF in Exile internet radio. It is a bit distorted at first, but this is soon rectified.