From the "Trilogy From the OUtside" press release, 2009: " I composed this large-scale personal work on the time scale of a bridge or highway project by a municipality. It was visioned, revisioned, budgeted, rebudgeted, finalized, and redrawn during the course of 7 years. During its creation I read "Remembrance of Things Past" by Marcel Proust, another wide-scaled work, and felt I finally began to understand it.  I had two children, and moved from one distinct period of my life to another. I lost several important people in my life - a friend to a debilitating ailment, and two close cousins in an unexpected and random accident. The piece attempts to address the vastness of the personal, the vastness of a tiny and personal perspective, the singular vastness shared by a moment -  and ten years."
Below is a placeholder blog entry: return to see my complete discography soon. 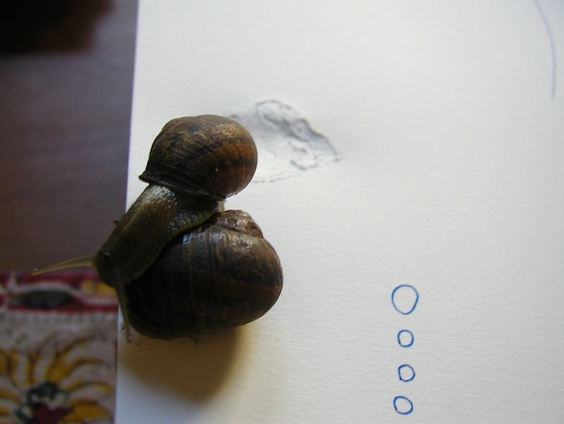 From Myspace page: Summer/2008
Snails, Work, and the Meaning of Collaboration
I have received quite a few comments about the work I'm doing with snails, so I thought I would clarify some things. The snails that I'm collaborating with are living in a terrarium at my house. They are well fed on greens, and, I think, well taken care of. This week I cleaned their lodgings, and discovered mounds and mounds of eggs under the soil. I took those eggs and buried them at a local park, where I think their progeny will have a reasonable chance of survival.
The three snails I'm working with, dubbed Arugula, Epazote, and Nasturtiums, were rescued from my mother's house. My mother grows roses in her garden, and has a constant battle with snails, who eat her plants. So, as many gardeners do, she poisons snails. When I initially took the snails from her garden, they seemed sick, and it took a while before they seemed better.

I have collaborated with these snails by inviting them to explore paper, and then placing charcoal onto their mucus trails and the bite marks they make as they taste the paper. Some of the paper they've crawled on and eaten has already had graphic scores drawn on it.

They react differently to different weights of paper, and especially like to eat heavy grade paper. Four of the pages we've made together were used in my piece, "Snail Road House," where the performers interpret these markings using a system of cues, and also interact in other improvisational structures.

I made a conscious decision not to bring the snails themselves into the performances. I don't think this would be something they would enjoy.

So, what does it mean to collaborate? It certainly implies a degree of mutuality. I am truly trying to collaborate with these beings in a way that preserves a spirit of mutual exploration. I'm interested in having a true collaboration with another species.